A friend of mine once showed me a movie trailer on YouTube for a foreign-made film called “B-14.” It’s about rival drug gangs, featuring an assassin with superhuman powers. To say that the special effects are ridiculously over-the-top would be an extreme understatement! This movie wasn’t meant to be funny, but I laughed more during this 1-minute trailer than I have during some 2-hour actual comedies. It seemed as though the producers just discovered special effects the night before and were determined to use all of them in this film – no matter how poorly executed, or whether the scene called for them or not. But what about special effects in photos of nature?

Personally, I think special effects work best when they enhance existing attributes within a photo. If you can discern a distinctive pattern within a subject’s color or shape, or the overall composition of the scene, chances are there’s an effect that will accentuate it.

The photo above is the original, unaltered view of the opening photo. What initially stuck out to me in this photo was a kind of circular, swirling motion created by the angles and positions of the daylily blooms and buds. To emphasis that look, I used the Radial blur filter in Photoshop. This filter offers a choice of two different types of blur: spin or zoom. I chose the spin option because it perfectly mimicked the kind of motion that originally caught my eye. All filter effects are global, so I applied a layer mask and used the brush tool to adjust its opacity level (the degree to how much the effect is noticeable) over various parts of the image. I completely removed it from the tips of the stamens.

I detected the same type of circular motion when I looked at the image of the maple leaves below. Once again, I applied the Radial blur filter, but left the center leaves unaltered.

The zoom method of this filter simulates an exploding effect. It comes in quite handy if you want to emphasize movement in passing clouds. I found it to be extremely useful in the fall foliage scene below. I came across a couple of magnificent Japanese Velkova trees one autumn in the New York Botanical Garden. I positioned myself so that one tree was directly behind the other, with only its arching branches visible. They were at their peak and appeared to be exploding with color. I decided to create a literal interpretation of what I felt. The zoom method brought my vision to life. However, unlike the above examples, which only required a few minutes of minor tweaking of opacity levels, this effect took me about a week to complete. To make it appear as though the color was actually exploding from behind the trees, I painstakingly removed the effect from most of the major branches, as well as the tree and the ground. I then gradually increased the effect (by raising the opacity levels) as I worked my way out toward the edges.

Another interesting special effect filter is the Motion blur. As its name suggests, it’s primarily used to convey motion, i.e., creating streaks in the wake of a moving car or a track runner. In nature, however, it’s not used so much to show motion, as it is to exaggerate large clusters of vertical or horizontal lines. A forest is a prime location to apply this effect. I shot the image below during late autumn in Croton Dam Park in Upstate New York. The filter enhanced the strong verticals of the trees. As usual, I controlled its opacity levels by using a layer mask and the brush tool. I completely removed the effect from the ground, then gradually increased it toward the top. I removed slightly more of the effect in select areas in order to better highlight the sparse foliage.

Applying special effects with a filter is fairly simple and straight-forward. It may take some time learning how to fine-tune things to your personal taste and vision, but the end results are somewhat predictable. Other types of effects require a considerable amount of previsualization, and the photos below are one such example.

Combining images is like Forrest Gump opening a box of chocolates… You never know what you’re gonna get! I combined the two images above via the “stacking” method in Photoshop – a unique way to combine two or more images. It’s a technique which I will go into in depth in a future article. My intention was to blend another tulip image onto the face of the large, triumph tulip. In order for theeffect to work properly, I needed to find an image of tulips that were small enough to fit comfortably inside. They also had to be of a color that wouldn’t clash, be positioned at the right height and shot in the same type of light. I searched my files and found this image of white, single-late tulips. I thought the image would work perfectly, but I couldn’t be completely sure until I actually combined them. After I did, I was amazed at how well they meshed. They were at the perfect height and their white color really stood out. Perhaps most remarkable of all – even bordering on serendipity – was the way the tall grass around the white tulips almost seamlessly melded into the design on the bottom of the orange, triumph tulip. Using the brush tool, I carefully painted in and/or out parts of the single-late tulip image to create a sort of optical illusion out of the visual confusion.

This photo is also notable because it was years in the making. I shot the triumph tulips on May 6, 2015, and the single-late tulips almost exactly a year earlier on May 7, 2014. But it wasn’t until last year when I actually combined them. Nowadays, I actively plan for creating this effect by shooting photos with varying amounts of dead-space to better accommodate any potential image compilations.

By definition, special effects are meant to alter reality. They’re fun to use and there really are no rules as to a right or wrong application. Depending on your artistic vision, they can be as subtle or as outrageous as you desire. For best results, though, special effects are more striking when they affect reality in a more realistic manner. Of course, there’s nothing stopping you if you want to see just how crazy you can get. But, if you really want to see crazy, just check out the “B-14” trailer on YouTube! 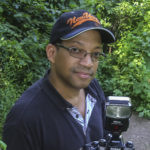 F.M. Kearney began his career as a photojournalist for a variety of local New York City newspapers. It was an exciting profession, which allowed him to cover everything from famous celebrities to ride-alongs with NYPD and FDNY. He now specializes in nature and urban landscapes. To view more of his work, visit www.starlitecollection.com. He can be contacted at starcollec@aol.com, or followed on Facebook (@fmkearneyphotos) and/or Twitter (@fmkearneyphoto).