On Bended Stems: Explore the Beauty of Post-Peak Tulips

On Bended Stems: Explore the Beauty of Post-Peak Tulips 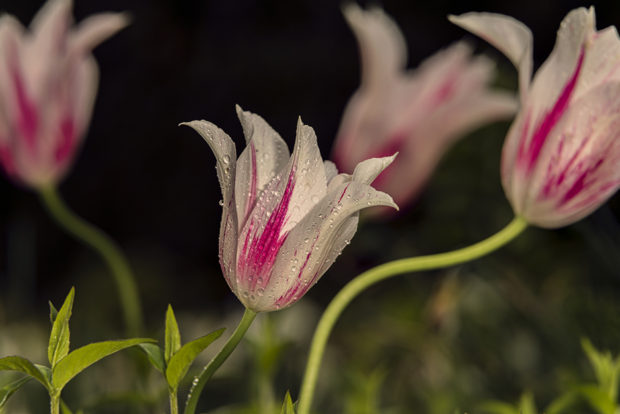 Timing is everything. As nature photographers, we’re constantly trying to schedule our shoots during times when our subjects will be seen at their best. For landscapes, this is generally during the “Magic Hours” of the day – the hour just before sunrise or after sunset. Flowers can benefit from the warm light at this time of day as well, but more important than that is catching them at the peak period in their blooming cycle. It’s an absolute obsession for some photographers. A field of tulips in pristine condition is truly breathtaking. The photo below is one such example. 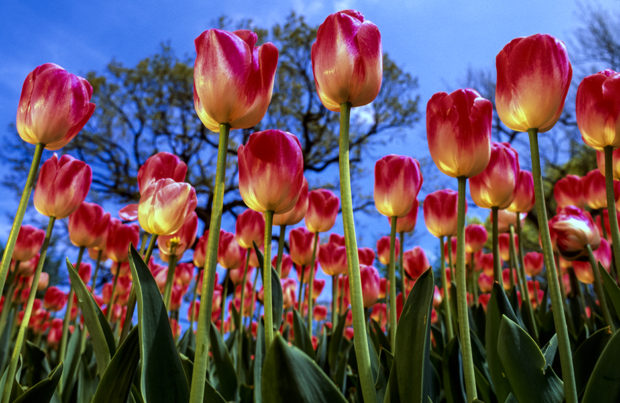 This impressive display is nothing short of perfection and it’s very hard to miss. It immediately captures your attention and demands to be photographed. But, when it comes to tulips, “perfection” can be a relative term. If you find yourself shooting at a time when the tulips are slightly past their peak, don’t despair, good photo ops are still available. Certain varieties of tulips are a lot like people. Their posture begins to deteriorate as they age. Stems that were once straight and tall begin to bend and sway.

I shot the opening photo of this article in the New York Botanical Garden during the final stages of these lily-flowered tulips’ lives. From a distance, they literally looked like a haphazard heap of horticultural has-beens. Most people probably wouldn’t even give them a second glance. But, if they had taken the time to look… really looked, they would have discovered many wonderful possibilities.

A field of perfect tulips can be quickly captured with a wide-angle lens set for maximum depth of field. Aging tulips, on the other hand, are better served with much longer focal lengths and shallow depths of field. You can easily single out one or two of the best-looking blooms and transform annoying distractions into beautiful washes of color. Some photographers like to open their lenses all the way to maximize this effect, but you may have difficulty getting all important elements sharp. I prefer to close down a few stops from the widest setting to around f/4 or f/4.8. This will bring more of the flower into focus, while still maintaining a pleasing bokeh in the background. By carefully surveying the scene – almost like allowing your eyes to adjust to darkness – several intimate close-ups should eventually reveal themselves. Below are just a couple more of the images I was able to coax out of this sad little flower patch. 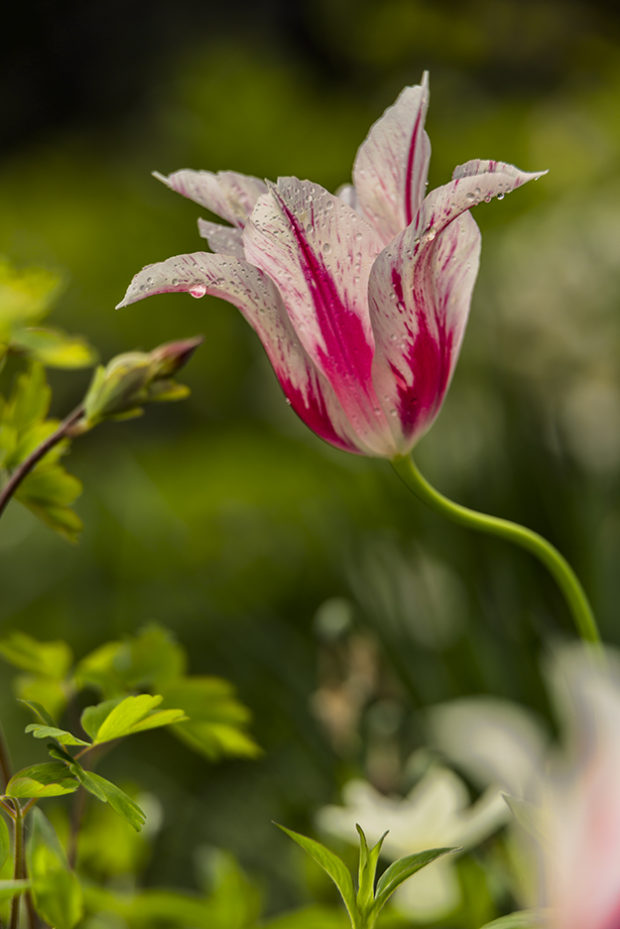 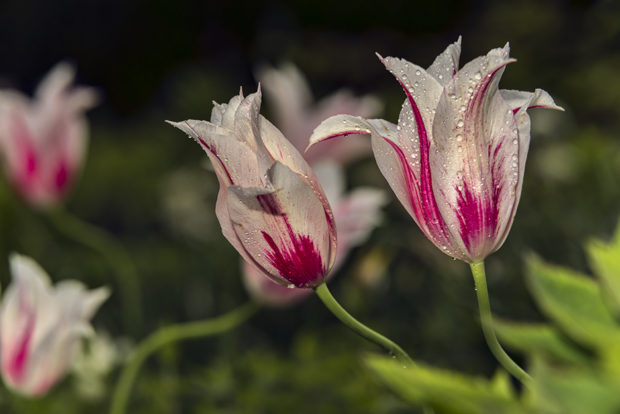 Long focal lengths (200mm or more) and minimal depth of fields work best for scenes like these.

Personally, I prefer tulips in this condition. As long as they don’t exhibit obvious signs of distress, i.e, missing petals and/or brown age spots, the bent stems tend to give the tulips a more relaxed and expressive quality. The tulips appear to perform a type of rhythmic dance as they peek out from behind surrounding foliage and surreptitiously lean into the scene. If they lean into each other they can even exude a hint of romance. The two Viridflora tulips below seemed destined to be together! 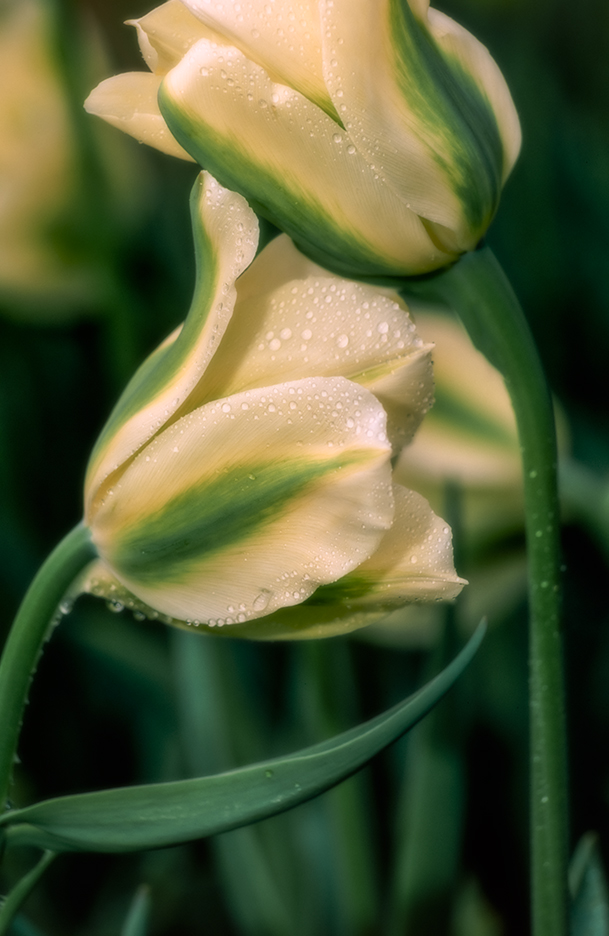 If the stems are bent completely over, the underside of the tulip can also provide an interesting view. I shot the colorful tulip below growing out of a planter in the Brooklyn Botanic Garden. I usually carry a small water bottle with me to add my own dew drops. It wasn’t needed here, however, because these drops were from actual rainfall. Sometimes, you can get so caught up into getting a shot that you block out all other external factors. I didn’t realize it until after I was done that it was raining at a pretty good clip. I had to put my gear away and cover my bag with a tarp until it passed. 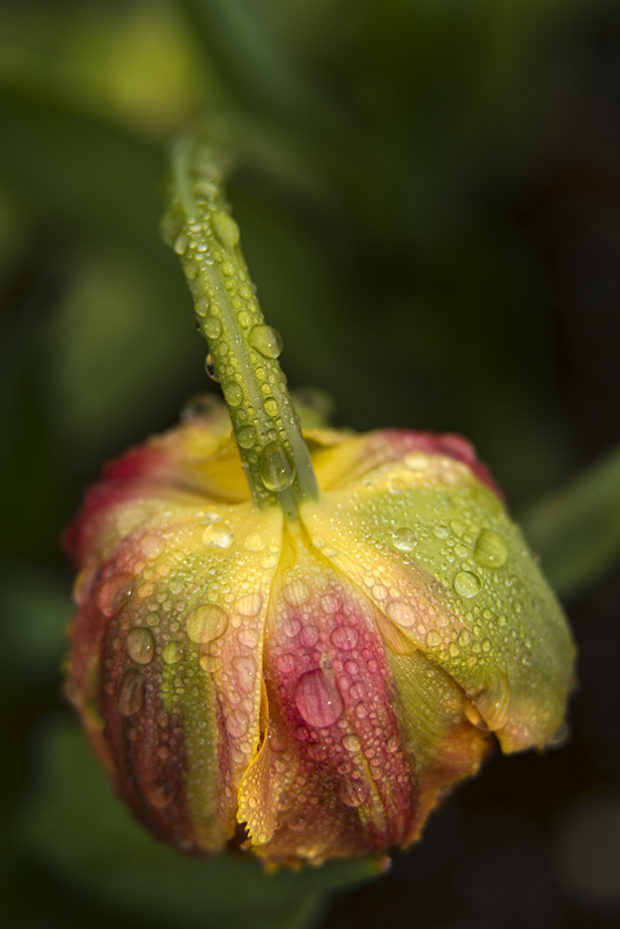 I know some photographers who actually specialize in shooting dead flowers. While I’ve never gone quite that far, I suppose it does have some sort of unique appeal. The point is, though, when it comes to flowers, perfection is often overrated. Tulips are like fine wines that get better with age. The next time you come across a patch that’s slightly past its prime, don’t be so quick to pass it by. It’s amazing what some “old-timers” have to offer.

F. M. Kearney began his photography career as a photojournalist for New York City newspapers. His focus soon shifted to capturing the beauty of the natural world. As an award-winning nature photographer, Kearney’s images have been widely published. A slight departure from photography, his recently published horror novel, “They Only Come Out at Night,” about supernatural happenings in the New York City subway (partially inspired by his travels as a photojournalist), is available on Amazon. To see more of Kearney’s work, visit http://www.starlitecollection.com.