A Likeness of Lichen: Photographing and Appreciating Tiny Organisms

A Likeness of Lichen: Photographing and Appreciating Tiny Organisms 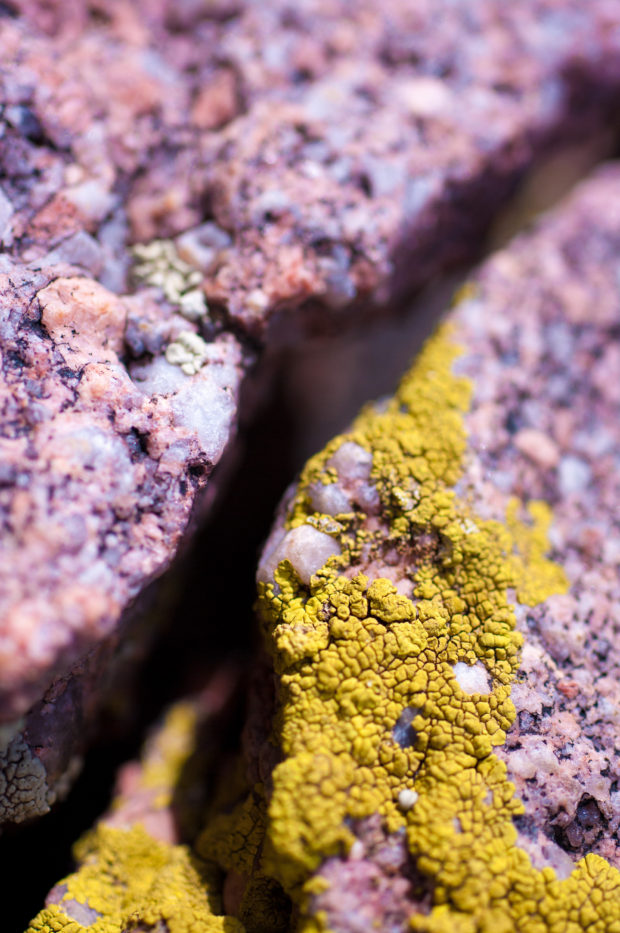 The rocks along the Mesa Trail in Boulder, Colorado are covered in the most incredibly colorful and uniquely shaped lichen. All you have to do is stop and stoop down to them. This shows the bright yellow crustose lichen, Pleopsidium spp. © Haley R. Pope (TerraLens Photography LLC).

Dewdrops quivered under my breath as I knelt down, my face but a couple inches away. Like sapphires, emeralds, and canary diamond they glistened, reflecting the vibrant organisms beneath. Like tiny, round mirrors, or tiny magnifying glasses, each micro detail was brought to prominence. Upon closer inspection, even my face, upside down, reflected back at me in as many copies as there were dewdrops. They jiggled and jostled, yet resisted the force of my breath and persisted in perfect cupola-shapes held together by cohesion.

As mesmerizing as the water drops were, I was here to photograph what lay beneath the transparent molecules. I drew a breath and blew. The water bubbles rolled away and revealed my intended subject. Tortuous as brain tissue, crusty as a scab, yet as significant as any other organism: lichen.

Which is actually a misnomer. Lichens are not single organisms. These scaly-looking growths, often incorrectly believed to be plants or fungi, are actually composite organisms arising from a symbiotic relationship between fungi and algae or cyanobacteria. The algae or cyanobacteria benefit from the fungi, which gather moisture and nutrients from the surrounding environment. Without the fungi, lichens would not be able to survive since they don’t have root systems, as do plants. However, like plants the algae or cyanobacteria produce food by photosynthesis, turning sunlight into energy, which in turn benefits the fungi. It’s a perfect cooperative arrangement.

Around 20,000 species of lichens are recognized, although each lichen is actually made up of a species of fungi and a species of algae or cyanobacteria. In an attempt to keep their classification simple, lichens share the same scientific name as their host fungus. If all lichen were lumped together, they would cover an area equivalent to the United States of America, approximately 6% of the Earth’s land surface. They grow in a variety of habitats ranging from warm sea level to cold alpine elevations, and on top of practically any surface. Where you are most likely noticed them is on rocks, bark, leaves, mosses, or dangling from branches. What’s more, lichens come in diverse shapes too. Some look like tiny leafless branches, called fruticose, while others are curly leaf-like structures, called foliose, or crusty flakes that peel like paint, called crustose. 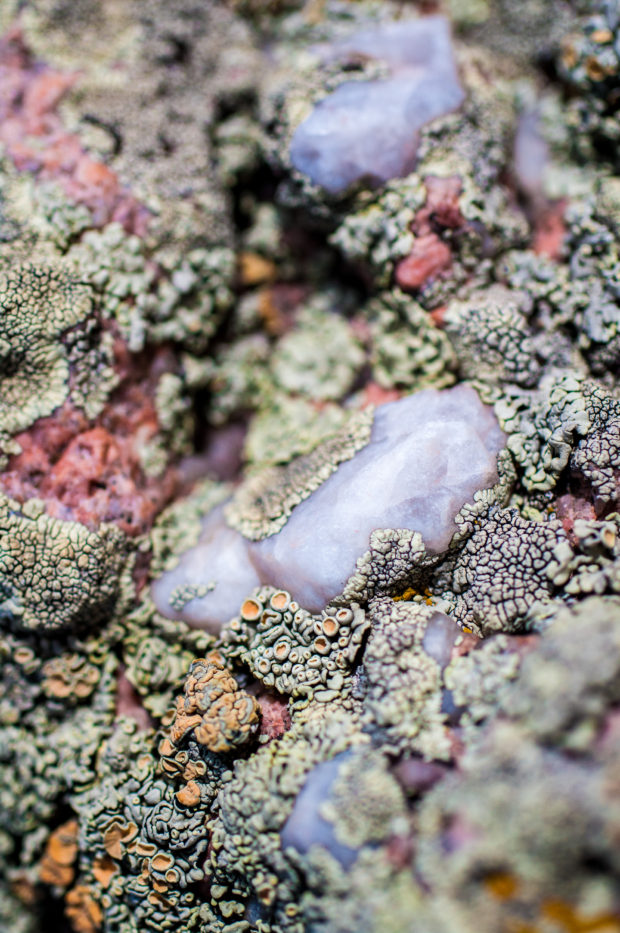 Lichen through a lens

Once the water was gone, I raised my camera, a Pentax K-7 with a Sigma DG macro 50mm f/2.8 lens. I leaned in to within several inches of the rock surface and through the viewfinder noted the unusual shapes and textures. It was hard to tell where one lichen began and another ended. They merged together, one overtaking the other, trying to smother the rock surface beneath. In one square inch, tiny orange and green cups protruded from the surface of the rock like octopus suckers searching for something to grab. Others resembled sea anemones. It was like wading through a terrestrial intertidal pool.

With so many textures, patterns, shapes, and colors I wondered where to focus my camera and how to get the best angle. That’s where the benefit of my prime macro lens came in. Shooting on aperture priority, I set my camera to f/2.8 – the widest my aperture could go – to achieve a very shallow depth of field and ensure my intended subject would be isolated from the background. With my eye to the viewfinder, I scanned over the rock and lichens waiting for a curious pattern or series of textures to present themselves.

When nothing in particular caught my attention, I changed positions to look down on the lichens, then from the side or from below eye level. Using a prime lens required me to physically change my position to get a different view or angle. I couldn’t simply zoom in or out. And, because I was playing an active role in creating the shot I desired, rather than passively zooming, it helped to fully draw me into the experience.

Adjacent to where I stooped, grew thick rough skin that seemed the most determined to engulf the rock. Its leading edge grew out like kudzu claiming anything in its path. Several inches over, a bit of pink rock with opaque crystals was visible – one of the last patches to remain uncovered. Camera in hand, I moved over to my right to observe another rock. Here, the most predominant lichen was spread evenly across the surface like a lush meadow with colorful sprouting flowers reaching for the sunshine. There were a lot of details I could capture here. But lichens are not only strange composite organisms that come in an array of colors, shapes, and sizes. They are important environmental indicators and tools as well. 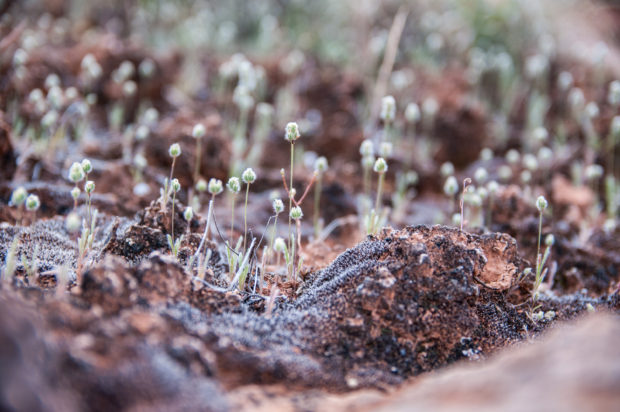 While the fossil record for lichen is poor, the oldest fossil evidence suggests lichens have existed for 400 million years, older than amphibians, reptiles, birds, or mammals. Thanks to their extremely slow growth rates, lichens can live for hundreds or thousands of years, making them contenders for the oldest living organisms on Earth. Most are tolerant of extreme environmental conditions. They can enter a state of metabolic suspension where the cells are dehydrated, halting most biological activity. In this state, lichen can withstand wider temperature extremes, higher amounts of radiation, or severe drought. These traits allow them to be used to date geologic events thousands of years ago by hinting at the age of the exposed rock. It has also allowed scientists to see changes in the climate and provide evidence for climate change today.

Hardy in the face of intense environmental change, they’re exceptional at colonizing an area after a natural disaster. Lichens are considered pioneer species, meaning they’re some of the first to settle on surfaces after a disaster. Their primary succession encourages the secondary succession of other vital species. However, many lichens are susceptible to human-induced environmental disturbances. By studying lichens over time, it’s possible to use them as indicators of air pollution, ozone depletion, and metal contamination. As effective quality control officers, they warn us of ecological problems that could affect our own lives. 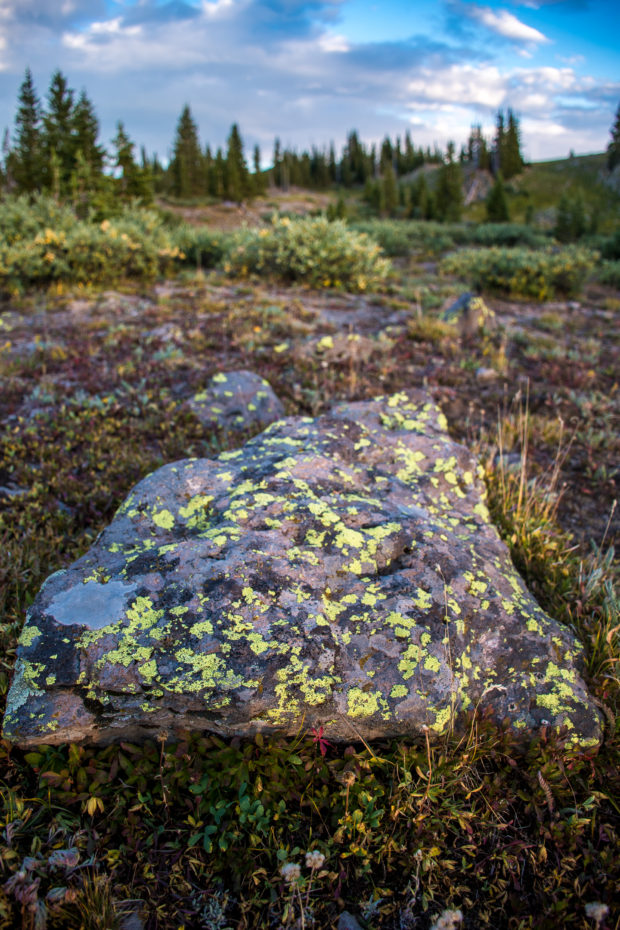 Up on the the flat tops in the Flat Tops Wilderness area of the White River National Forest in Colorado, you can find some incredibly vibrant plants, lichens, and fungi, especially in the summer months from June to September. © Haley R. Pope (TerraLens Photography LLC).

They’re easy to ignore but, oh, what you miss

I had been so engrossed in photographing the lichens’ alien details that I decided to stand up to take in the whole scene. Suddenly, individual lichens and their details disappeared. In their place stood greenish-colored boulders that, until closer examination, would have appeared unremarkable and been easily overlooked. During my lichen photo shoot, countless people had passed me on the trail without so much as a glance as to what I found so interesting.

The next time you take a hike, whether in the winter, spring, summer or fall, crouch down to knee height and look at the world around you even if you don’t have a camera. Notice the branching, curly, crusty edges of life growing on the rock surfaces. On the tree bark. On the ground. On the moss. Pay attention to their colors and shapes and sizes. How many different kinds of lichen can you spot? What do they look like? What could their presence or absence possibly mean about the habitat and environment you’re exploring? As ancient witnesses to both the good and the bad, lichens can be thought of as the old wise crones of the biological world. Let’s stoop down, converse with them, and see what we can learn about the world we inhabit.

Don’t miss a single blog post! Enter your email address under the “Subscribe to the NANPA Blog” heading on the right side of this page and we’ll notify you every time a new article is posted.

Haley R. Pope is a zoologist and conservationist with a passion for photography and writing. She uses those mediums to explore wildlife conservation topics and share the biological knowledge in a visual story-like format to inspire awe of our planet’s inherent beauty and encourage the responsible treatment of nature. As the president and owner of TerraLens Photography LLC, she offers freelance photography, writing, and photo archiving services to other organizations.

Haley is also a trip leader for Habitat for Humanity’s Global Village program, which operates in more than 40 countries and builds houses for those in need. In the future, she’d like to lead ecological and photography focused trips. Connect with her below!