By Blog PosterFebruary 26, 2017No Comments

Story and photography by Jerry Ginsberg 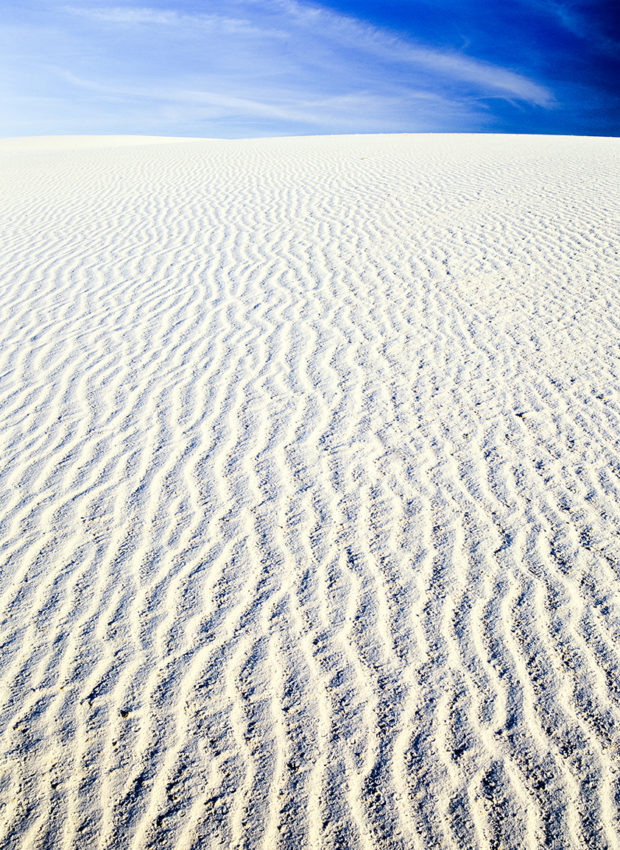 Although the big state of New Mexico has just one lone national park within its borders (Carlsbad Caverns — see NANPA eNews December, 2016), there is a national monument that offers another opportunity for some terrific landscape images.

At just a few miles from the comfortable town of Alamogordo, New Mexico, the White Sands National Monument is an easy drive of only about three hours from Carlsbad Caverns National Park. If flying in, you might check for flights to both Albuquerque and El Paso, Texas.

White Sands is located in the Tularosa Basin, in the middle of the famous White Sands Missile Range. Because of its location, the dune field is closed to the public on days when a test launch is scheduled. Check in advance to avoid disappointment. Even then, launch schedules can change, and they take priority over tourism (and even us photographers).

Few National Park Service units have names that are so very descriptive as White Sands National Monument. The sand making up these terrific dunes is actually a granulated form of the mineral gypsum, and it glistens sparkling white, especially in the bright New Mexico sunlight.

Even though you’ll be driving the unpaved gypsum tracks within the dunes, they are hard-packed and suitable for any standard passenger car.

Hiking through these semi-firm dunes is only slightly less strenuous than doing so on the more typical loose sand found elsewhere. As you traverse a small part of this enormous 275-square-mile dune field, the rolling shapes seem to come at you in endless waves.

In addition to the glistening dunes is the desert foliage here, most notably the photogenic flowering soapstone yucca. An assortment of rodents (and their tracks and tail prints) can also make for some interesting compositions. 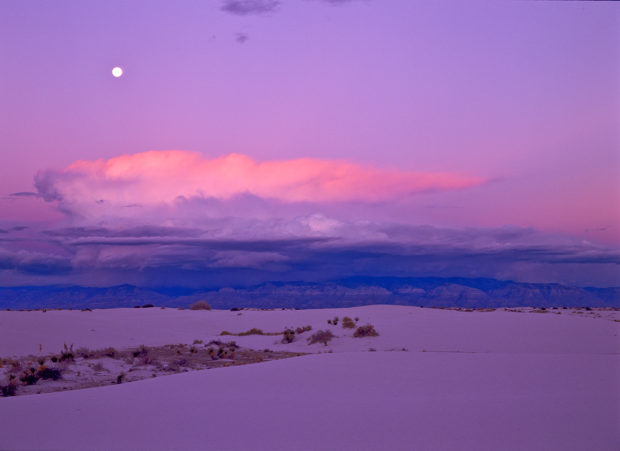 Both morning and evening light can be productive. I favor the morning. This is a popular place. On nice afternoons the national monument can be filled with families and kids who leave myriad footprints and snowboard impressions all over the place. Giving the night hours some time for winds to blow and smooth out some of these can help. Of course, too much wind can also cause blowing grains to damage your camera gear. Be careful. Even if the wind smooths out the tracks, it might be best to hike out a few hundred yards from the roads in search of the cleanest looking forms, since most visitors tend not to stray too far from their cars.

The best photography at White Sands is found when the sun is right at the horizon. This provides the greatest degree of contrast on the glistening dunes and the shadows between the ripples. Once the sun gets higher in the sky, that contrast evaporates quickly.

A good late-day sky offers the promise of some beautiful sunset light as well. The bright and colorful evening sky often reflects its soft light onto the pure white dunes, turning them a beautiful array of soft pastels. Don’t miss it.

You may notice that the posted hours of the monument will not allow you to be in the dunes before sunrise. However, there is a way to do it. Inquire at the charmingly designed visitor center. With a couple of days’ notice and a little luck, you might be able to arrange for a park ranger to allow you through the gate well before dawn. Some paperwork and a nominal fee covering the overtime are required. The exclusive access is well worth both.

Jerry Ginsberg is a freelance photographer whose images have graced the pages of hundreds of books, magazines and travel catalogs. He has photographed all of North America’s national parks with medium-format cameras. His photographic archive spans nearly all of North and South America. More of Jerry’s images can be seen at www.JerryGinsberg.com. Email him at jerry@jerryginsberg.com.