By Blog PosterDecember 19, 2014No Comments 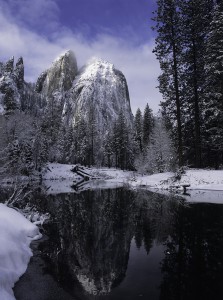 Most of us are familiar with Ansel Adams’s iconic black-and-white images of Yosemite National Park in California’s Sierra Nevada Range. Adams considered the park to be “one of the great shrines of the world.” His images almost singlehandedly elevated landscape photography to recognition as a true art form.

Knowing that May and June are the months when Yosemite’s waterfalls are running at their heaviest is hardly news. But how many of us have considered Yosemite to be a prime winter photo destination? At only 4,000 feet of elevation, Yosemite Valley often gets better winter weather than many other spots in the Sierras. February can be magical here.

Perhaps one of the most famous scenes to be found is the dramatic and ephemeral Horsetail Falls. For a few days in mid-February, this small cascade can light up with a golden glow that is truly a sight to behold. This occurs when the last rays of the sun strike the shoulder of El Capitan and reflect back from behind the falling water, seemingly lighting it from within. The spectacle lasts for only a few minutes. To photograph it, you must be in position and ready at least 45 minutes or more before sunset. Arrive early and be patient.

But that’s not the whole story. To enjoy this spectacle, three conditions must be present, all at the same time. First, there must be enough of a snowpack on top of El Capitan to feed the intermittent fall. Second, the temperature should be high enough so that the snow melts and the water flows. Third, the southwestern horizon must be clear enough for the last rays of the fast-dropping sun to strike the rock directly. It’s a real trifecta and only three out of three will do. When you consider that the angle of the sun is just right for only five to seven days (or less), it becomes easy to see why this composition is so special.

Other great spots to see and photograph are Yosemite’s iconic granite mountains and domes as they reflect in the Merced River. Roam along the river’s south bank starting at dawn, and be ready for opportunities as they present themselves. Try for El Capitan, Three Brothers, Sentinel Rocks, Half Dome (preferably late in the afternoon), and make some time for Swinging Bridge where the reflection of Yosemite Falls can provide a great photo opportunity if the falls are flowing and conditions are right.

Along the way, keep a sharp eye on the hillsides along the valley’s flanks.

The ever-changing patterns of fog intertwined with the trees can make for purely artistic images. 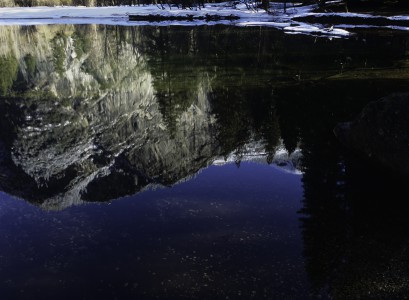 Snow is possible here at any time. Weather fronts roll through frequently, and the park service can require the use of tire chains on vehicles at its discretion. To be prepared, arrive here in a four-wheel drive vehicle with all-weather tires and carry those chains. There is a dedicated chain-up area just west of the valley proper. Even though a snowstorm can impede driving and may leave you in your room for a while, having a little fresh snow on Yosemite’s granite forms and trees can make for some really terrific images.

Winter in Yosemite brings many seasonal closings. Rooms in Curry Village will likely be unavailable so plan on staying at either the Yosemite Lodge at the Falls (at Yosemite Falls) or just outside the park at one of the inns in nearby El Portal.

While the roads in the valley are generally open, both the Glacier Point Road and Tioga Pass will be closed until well into the spring.

Jerry Ginsberg is a widely published freelance photographer who leads specialized workshops. He has photographed all 59 U.S. national parks as well as most of the parks in South America using medium-format cameras. More of Jerry’s work can be seen at www.JerryGinsberg.com