The WAY I SEE IT: Anthropomorphism – Story and photographs by Greg Harvey

By Blog PosterSeptember 19, 2014No Comments

The WAY I SEE IT: Anthropomorphism – Story and photographs by Greg Harvey 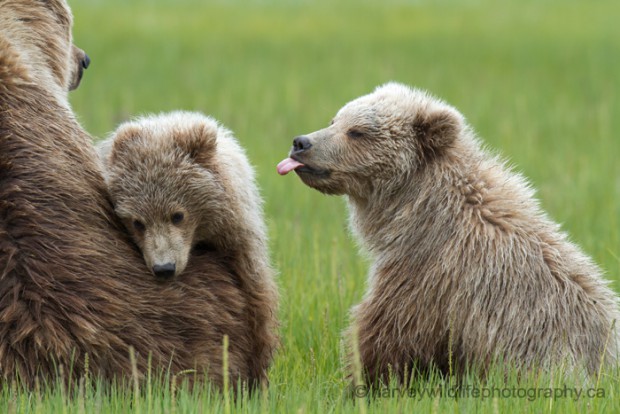 I enjoy seeing pictures of wildlife that are photographed while they display some kind of humanlike characteristic. Whether it’s a picture of a polar bear waving or a river otter floating on its back, when an animal displays behavior similar to our own, it brings a smile to my face.

Scientists call the practice of giving animals human characteristics anthropomorphism, and they avoid it. While an animal behavior may look similar to something that a human does, the thought process is not the same, they might say.

Still, as a wildlife photographer, I look for anthropomorphic behaviors because I believe that people viewing my images will enjoy seeing a behavior they can relate to. These kinds of images may even help to create a respect for animals—or, at least, a connection with them.

One of my favorite examples of anthropomorphism occurred while photographing a brown bear family in Alaska. I watched this family for several hours a day over five days. The female brown bear had two cubs, a male and a female. The male tormented his sibling every chance he had. The female cub was pretty feisty and fought hard, but she was rarely the aggressor. In one image, the female finally had enough of her brother and decided to take refuge cuddling with her mother. It’s as if she knew that her mother would not put up with his shenanigans.

So what is a rambunctious young male bear cub to do? He sticks out his tongue at his sister behind the mother’s back.

While there is probably not a biologist in the world who would say the cub had this thought process, that’s how it looked from my perspective. Growing up second youngest in a family of five siblings, I have experienced being both the victim and the aggressor. I can relate to both cubs.

Was the male cub really sticking out his tongue at his sister as though to tease her or show contempt? Was the female cub really plotting to get her brother in trouble? Only they know. By the way, does this fur make my butt look fat?