By Blog PosterMarch 1, 2014No Comments 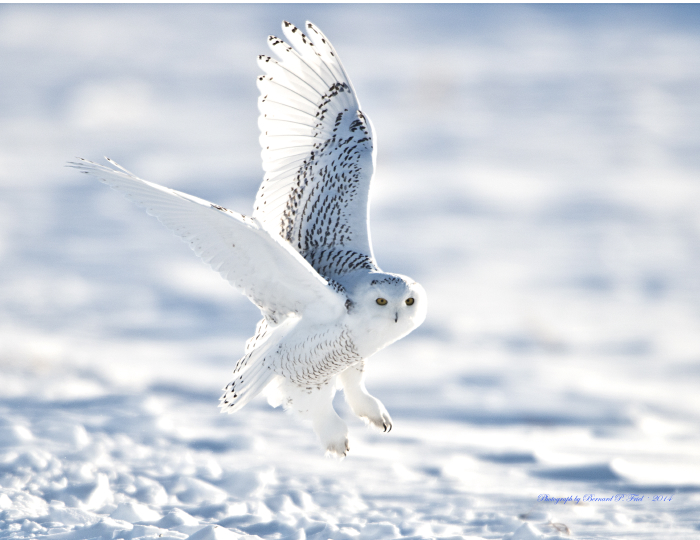 Text and Photographs by Bernie Friel

Not only is Minnesota experiencing record cold this winter, (an average January daytime temperature of 8º F) but to warm the hearts, if not the bodies of nature photographers (and bird watchers alike), there has been a record migration of snowy owls into the state. While in most years a few may be seen in far northern Minnesota, this year they have been found at more than 250 locations throughout the state. They have also been found into Iowa and as far south as Kansas. The presence in such great numbers of this bird of the Arctic tundra is thought to be a consequence of the crash in the lemming population (sometimes called the tundra potato chip) in their home hunting grounds, causing them to seek food further south.

While the snowy is not physically the largest owl in North America, that characteristic belongs to the great gray owl, it is the heaviest weighing in at about four pounds. It is thickly feathered, and what I found most interesting is that snowies have thick hair covering their feet and toes.

Because I am a member of the Minnesota Ornithological Union, I receive rare bird alerts, and in late December there were reports of snowy sightings in the open, snow-covered farmland just 20 minutes south of my suburban St. Paul home. Hoping to get a few good photographs of this rare visitor, I packed up my Nikon and a couple of long lenses and headed to the reported location. It was -15º F outside, but, due to the prevailing winds, it felt like -25º F to -30º F.

I soon found that there were three methods of locating this very large, almost pure white bird in the snowy fields. They could be found perched on a roadside utility pole, or perched on an irrigation boom in the farm fields, but the best method was to locate several cars, parked together along a farm road, for their bird watching occupants had already located an owl.

My first trip was not very productive. By the time I found an owl (and there were four or five in my destination area) it had become very cloudy and images of a white owl against an almost white sky or a white snow bank were not very rewarding.

Over the next five weeks I made nearly two dozen trips to this location, and I was always able to locate at least one snowy. 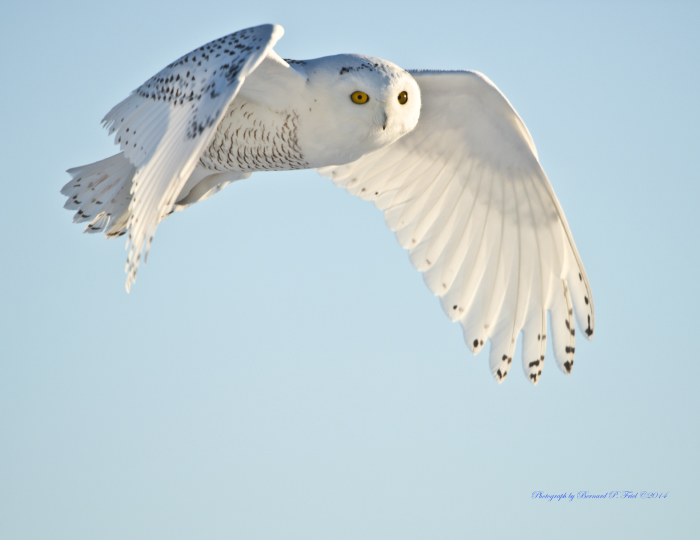 My best shooting was on a very cold, windy, sunny day. Because of the cold it was one of the few days that I was alone in the field. When I found a snowy hunting along a stretch of road, I stopped and tripoded a 600 mm lens and my Nikon D800. The fully adult male was very cooperative and flew back and forth providing me with many great images in-flight, as well as alternately perched on the snow or a utility pole.

The downside of this experience was the real pain of the cold. Even with heavy gloves, I had to return to the car every 15-20 minutes to warm my hands. Many images were missed as my cold numb fingers attempted to find the release button through the gloves. My mitten with the flip-up end was just not adequate protection, and a bare hand was out of the question.

So much for the snow, the cold and the wonderful photography provided by the snowies…next week it’s off to Florida, and the painted and indigo buntings, and maybe a barn owl to add to www.wampy.com. 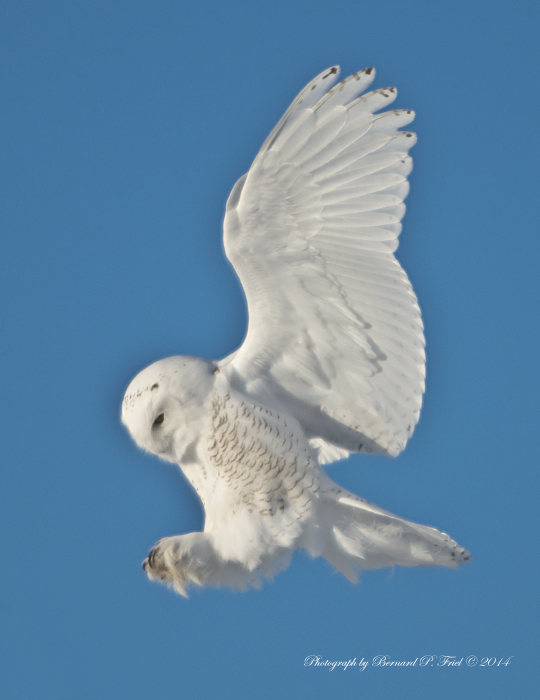